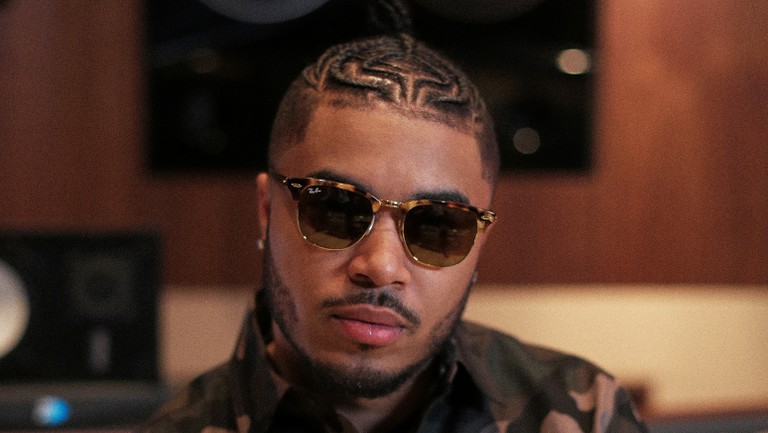 After proving himself as a producer on tracks by Ariana Grande, Travis Scott, Fifth Harmony and more big names, “facilitator of the function” Tommy Brown is kickstarting a new chapter of his career as he prepares to launch his own music label.

Under his new label, Champagne Therapy, Brown is partnering with Universal Music Group to develop, market and promote a roster of new artists. The news follows an especially successful past couple of years for Brown which saw him earn two #1 hits with Grande‘s “7 rings” and “thank u, next” as well as multiple Grammy nominations at the 2019 ceremony.

Based out of Los Angeles, Brown is still hard at work amid quarantine as he continues to produce and develop upcoming artists under Champagne Therapy. The multi-platinum producer can now reveal that he’s signed two artists to his label: Drew Boy and Six Months Sober. Pop Crave caught up with Brown this week to talk about the new artists, his approach to developing talent as well as his upcoming work with Grande and K-pop girl group BLACKPINK. Champagne Therapy was announced about a year ago. Where are you at with the label right now?

Right now i’ve been developing a couple of acts I’m putting out. We have Drew Boy out of Philly, we have Six Months Sober and a few other things we’re going to be releasing along with records from other artists. We’re about to actually start launching the artists now. I’m big on artist development. I want to make sure all the I’s are dotted, T’s are crossed until we step out into the world.

How would you describe Drew Boy & Six Months Sober?

Drew Boy raps and he’s from Philly. He’s like a hype man, super incredible, and he reminds me of a young Busta Rhymes because of the hype man aspect. He’s super super talented – he did the whole project in 3-4 days. Drew Boy is high energy, he’s like a rapper but also puts his real life story in it and does it in a comedic way.

Six Months Sober, she’s this girl who used to be a prostitute. She was on drugs, and when we met she got clean. She was writing these incredible songs about her story and the mission for exposing the world of sex trafficking. I stand behind her with that 1,000 percent, and I think it will be really interesting when people start hearing her story and hearing her songs and what she’s talking about. She has very lyrical, dark, airy music.

What’s your approach to developing artists on Champagne Therapy?

For the label I like to put the artists first. When it comes to executing an idea I want to do what they want to do. There are people who tell artists, “you’re going to be the next this or that,” but I’d rather ask what they want and help them achieve the goals they want to make. If they don’t want to be the next Jay-Z, i don’t want to push them in that direction. And with artist development, I’m getting them in studio with the best producers and songwriters and myself, I think that’s part of the mission too.

I think with artists that have the charisma, the story is truly them, not something you’re making up. We’re not saying, OK, “we’re making the next Katy Perry.” I don’t want the next. I want them, and I want them to bring who they are, and we can put a magnifying glass on that world.

Has the COVID-19 pandemic changed any release plans with Champagne Therapy?

I’ve had a few releases lined up that I pushed back. I actually think the social distancing part of it is kind of a blessing because it gives people a little more time to work on their craft and perfect songs, and make the last few tweaks they want. They can actually take a little more time, maybe do a few more songs.

I don’t have a huge team. We keep the circle very very small, but it’s incredible. We’re all family first. We focus on the name in front of the jersey, not on the back.

What’s your approach to signing artists? Are you actively on the lookout for new talent?

I don’t even find them, I let them find me. I think that’s always been the best step for me. i don’t go out looking, there’s no talent shows. Everyone from Ariana to Travis and anyone i’m working with, it just happened. We weren’t looking for each other.

You’ve been in the studio with Ariana Grande and BLACKPINK recently. What can you tell fans about their upcoming projects?

I did a little bit of work with BLACKPINK when I went to Korea. I have music with them that’s really, really incredible. I think the world is going to love them. And I also have music with Ariana, you’ve seen some of it online, but we have some incredible incredible records with both acts. Right now is the time I’ve been my most creative.

Tommy Brown and BLACKPINK in the studio

Your “Pass The Beat” challenge got a lot of attention online. What was the inspiration behind the video?

I wanted to reach out to different songwriters and producers like Charlie Puth, Skrillex, T-Pain, Marshmello and different people. I was like, let’s do something where we all come together and collaborate. I’m a very collaborative person, I said it’d be dope if we collaborate across the US and the world. I’ll start a sound, then they add a sound and so forth. It was really really good. I’m about to put another one out.

When can people expect new music coming out of Champagne Therapy?

I kind of like it to keep a surprise, but it’ll be out really, really soon.

BEHIND THE HITS: Producer J. White Did It Talks "Savage"