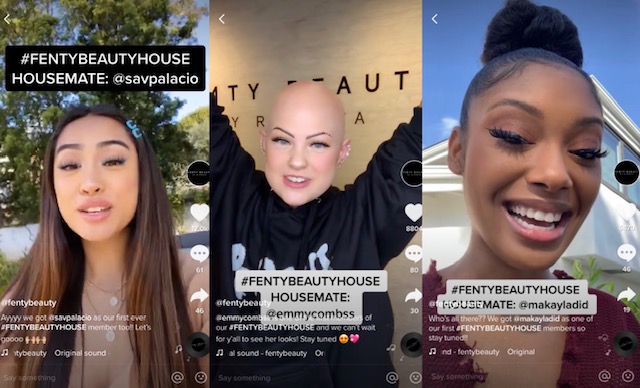 Rihanna is leveraging the power of TikTok with the opening of a brand new Fenty Beauty TikTok house. The home will serve as headquarters for a rotating group of “housemates” – AKA TikTok influencers – who will produce Fenty Beauty-inspired videos for the popular social media app.

Rihanna appeared at the home earlier this week to kick off its launch and explain the inspiration behind the idea: “I just wanted to create a platform for the next wave of content creators,” Rihanna said. “I think our generation is the sickest, the illest, the most creative. I can’t do it alone, so to join in with the people who are influencing the world, my community, my generation, this is like a hug.”

“We are standing in the official first Fenty Beauty TikTok home. I just wanted to create a platform for the next wave of content creators. I think our generation is the sickest, the illest, the most creative.” pic.twitter.com/OYgnRVMRKC

TikTok homes serve as a gathering space for groups of influencers to collaborate, network and expand their following on the app. While the concept has been around for years among Vine and YouTube users, Rihanna‘s new business venture into the world of TikTok houses marks one of the most high-profile endorsements of the concept. You may have first heard about TikTok homes from the “Hype House,” the Los Angeles-based mansion that houses such influencers as Charli D’Amelio, Addison Rae and Chase Hudson among others.

The Fenty Beauty TikTok house hit the ground running with the addition of its first five housemates yesterday. Check out each of the influencer’s introduction on the official Fenty Beauty account below:

@fentybeautyY’all heard it here first! We got @thedawndishsoap on deck as our of our first ##FENTYBEAUTYHOUSE members— y’all ready?! ?♬ original sound – fentybeauty

@fentybeauty@emmycombss is one of the first members of our ##FENTYBEAUTYHOUSE and we can’t wait for y’all to see her looks! Stay tuned ??♬ original sound – fentybeauty

The group of five have already produced several TikTok collaboration videos where Fenty Beauty are products are featured front and center:

We’re definitely interested to see how Rihanna and other celebrities utilize TikTok’s ever-expanding social media reach moving forward. Could we possibly see some #R9 content tied in with the app?

What do you think of the TikTok house concept? Share your thoughts with us on Twitter at @PopCrave!

10 years ago, #LadyGaga released “Marry The Night” as the fifth and final single from ‘Born This Way.’

Inspired by #WhitneyHouston, the song was recorded on her Monster Ball Tour bus back in 2010. After the lyrics were completed, Gaga recorded the song in just 1 hour.

It was met with critical praise and became a Top 40 hit in 13 countries, including the UK where it peaked at #16. It has since been certified Platinum in the US. ...