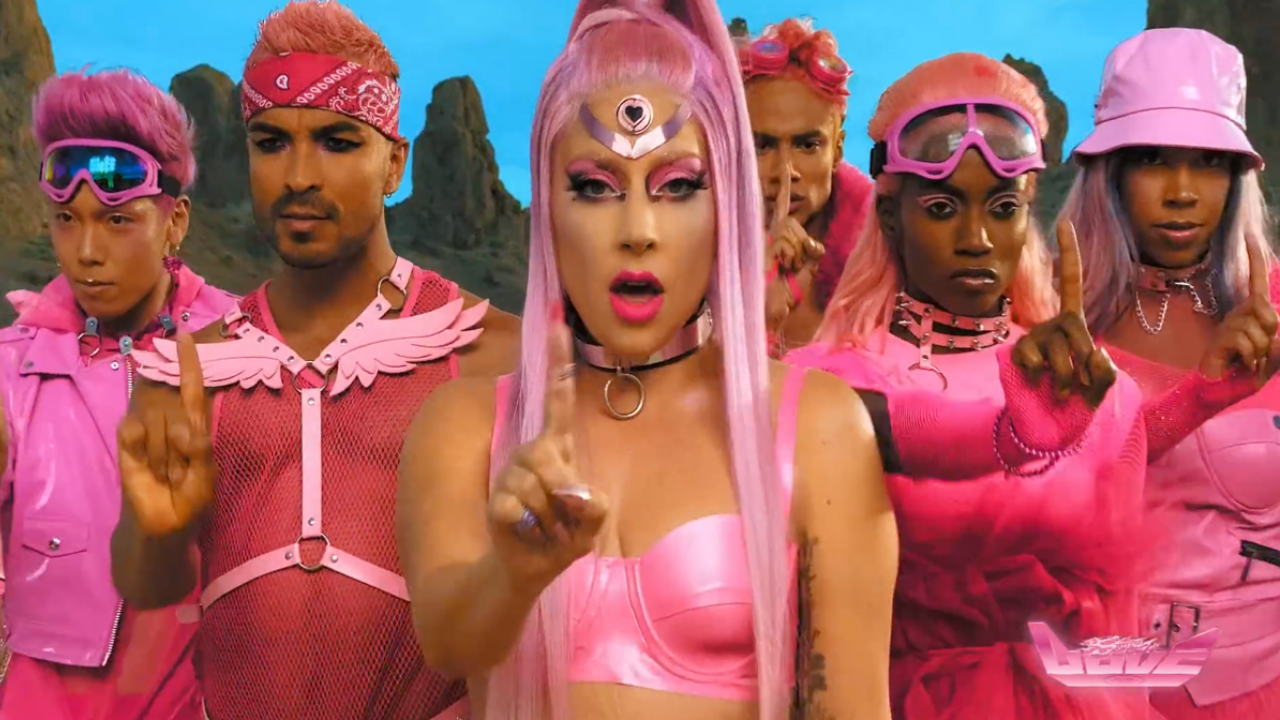 After over half a decade of successful experimentation with ‘Cheek To Cheek,’ ‘Joanne’ and ‘A Star Is Born,’ dance-pop Gaga is officially back. “Stupid Love” blasts onto this week’s Hot 100 at #5, becoming her highest debut since 2011’s “The Edge of Glory” and proving there’s still demand for her signature sound. “Love” serves as the lead single from her forthcoming sixth album, Chromatica, which promises more danceable bops for Little Monsters who have patiently been awaiting Gaga‘s return to proper pop.

The most fascinating part of the “Stupid Love” story, however, comes by way of its premature leak of four weeks that lacked any real negative impact on the track’s chart debut. With a fantastic #5 debut, the leak didn’t do much to deter fans from listening again – in fact, it may have even helped the track.

The “Stupid Love” rollout serves as a stark contrast to the way Gaga handled the leak of her 2013 lead single, “Applause.” After two low quality snippets made their way online, Gaga declared a “pop music emergency” and moved up the single’s launch, asking fans to assist her in combating the spread of further leaks. The rushed release inspired countless hot takes comparing “Applause” to Katy Perry‘s more radio-friendly lead single, “Roar” which dropped the same day, helping to spin a narrative that Gaga fumbled the launch of the ‘Artpop’ era.

A POP MUSIC EMERGENCY IS UNDERWAY 911

Interestingly enough, there was no pop emergency to be rectified with the release of “Stupid Love.” Aside from this cheeky tweet from Mother Monster, Gaga played it cool by allowing her most rabid fans enjoy the track a few weeks earlier without altering a well-thought out release schedule. In the weeks between the leak and official release, the track became a staple at gay bars across the globe and even inspired audience members at Gaga’s Super Saturday performance in Miami to demand a performance of the song. For the most devoted Little Monsters, having the song early felt special and only stoked further excitement for the era to come.

Fans at @LadyGaga’s #SuperSaturdayNight event chanted “Stupid Love” in an attempt to get her to perform the leaked track. pic.twitter.com/45vGKcoasT

It remains very curious, though, how a lead single from one of the most anticipated pop comeback stories of the year was “leaked” in high quality and its full length. This has led to speculation among stans that Gaga purposefully leaked “Stupid Love” in an attempt to gauge reactions and essentially create a focus group for her era. It may sound like a far out theory, but keep in mind that “Stupid Love” was available on the internet for months without ever being taken down by her team. Snippets of the track were even available on YouTube when Gaga teased the title via Instagram in October 2019, making it hard to believe that her team wasn’t at least aware of the leak.

It’s also possible that Gaga leaked “Stupid Love” without the intention of ever shelving it. Like every other pop star in the game, Gaga was undoubtedly going to disappoint some fans regardless of the direction took, making the “Stupid Love” leak a perfect way to filter out early, negative hot takes that would’ve spoiled the launch day. And trust us, there was a fair share of disgruntled fans:

Stan Twitter (and Twitter at large) thrives on negativity, but the launch of “Stupid Love” was met with an army of Little Monsters more than ready to stream and support the lead single. Many early criticisms of the song upon its leak were redirected toward the official music video, while others admitted they enjoyed the track after repeat listens over the past couple of weeks.

It’s nothing new for an artist to release song snippets in an effort to take the temperature of their fan base. Take Nicki Minaj‘s recent studio snippet of “Yikes” for example, or the way Lil Nas X essentially built the track list for his debut EP based on audience feedback to song clips. In theory, the “Stupid Love” leak is the same strategy with higher stakes. The song actually became a trending topic on Twitter weeks before it was released thanks to early reactions:

#StupidLove is trending once again on Twitter as rumors fly that it’ll serve as the lead single from @LadyGaga’s #LG6. pic.twitter.com/xAbcvD0pmA

Regardless of fan conspiracy theories, it remains clear that Gaga embraced the “Stupid Love” leak for better or worse – and rightfully so. Too often, artists are caught so off guard by leaks that they alter release schedules or even scrap material entirely. Examples of this occurred during the rollout of Lana Del Rey’s Born To Die and Ultraviolence, Charli XCX’s XCX World album, and of course Gaga’s aforementioned “Applause.” The first-week success of “Stupid Love” reinforces the idea that Stan Twitter operates in a bubble with minimal impact on the general public. Just ask any friend outside of Stan Twitter their thoughts on the “Stupid Love” leak, and you’ll learn that a “monumental” moment to stans is likely not even a blip on a casual fan’s radar.

As bad as it may sound, artists can sometimes benefit by ignoring Stan Twitter.

Gaga‘s ability to embrace the leak in 2020 is a testament to the way streaming has changed music consumption habits. If a song were to leak in the digital era, then more casual fans were much less likely to purchase the single, thus negatively affecting the song’s chart position. However, in the streaming era, fans who listen to a leak and enjoy what they hear are compelled to add the track to their streaming platform of choice upon its release. No one prefers listening to random mp3 files in Google Drive when they can just stream it in their native streaming apps. And even if the biggest stans hear the music a bit earlier, this won’t affect the response from casual listeners who likely never heard the leak.

Whether or not it was intentional, Gaga once again finds herself being a trailblazer in industry for demonstrating that major artists of her stature shouldn’t be so fearful of leaks in the streaming era. With all that said, stream “Stupid Love” on Spotify here.